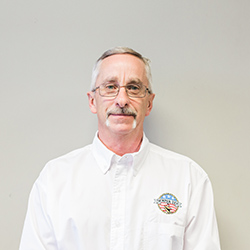 Project Superintendent
Joined Semper Tek in 2018
Anthony Anderson is a U.S. Navy Veteran who served for four years. He was stationed in ASWOC Keflavick, Iceland and held the rank of E-5, Operations Specialist, 2nd Class Petty Officer. Anthony’s jobs while serving included Radar, Communications, and Navigation.
Anthony says that it was a true honor for him to service his country. Now as a Superintendent working on many VA Hospital jobsites, he interacts with fellow veterans often. “It is very humbling now to work in the VA hospitals, to see some of the true war veterans come through with the issues they have. It helps to put the daily issues the rest of us have into perspective, seeming so trivial now.”
Anthony encourages people to serve in the military; however, he recognizes it’s not for everyone, but does believe some sort of service/sacrifice should be made. “Some people are not military compatible. The Military was the best choice for me but, there are so many other ways to serve our country. Young people today take this all for granted and don’t realize what it takes to keep this country free and a Democratic Society. Everyone should try to serve their country in some way.”